Mac’s Engineering CC provides Technical and Service support to the Mining and Process industry of the economy. 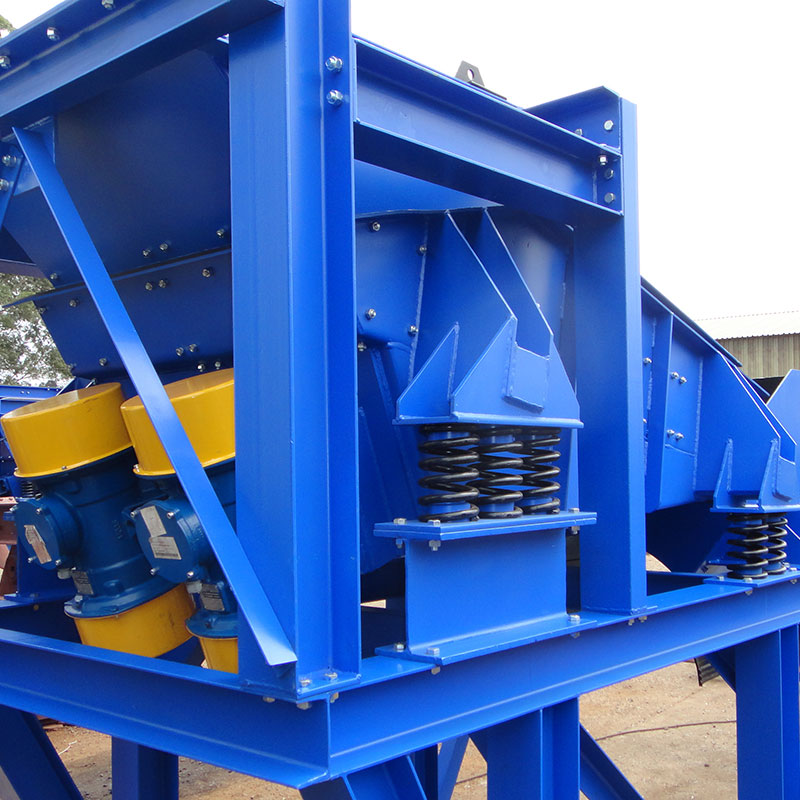 Mac’s Engineering was initiated in 1987 with a new Prototype Double Deck Resonance Screen, for the industry.

With the success of the early screens the company was registered in 1989 to pursue the Manufacture and supply of a large range of Resonance screening equipment to the Mining and Process industry. As we have grown over the years we have extended our scope of work to include:-

Our customer base encompasses the whole commodity market in South Africa, with Screens, upgrades and additions, as well as complete plants.

We have Contractor and Original Equipment Vendor Numbers for all the major companies. This has been achieved by our proactive manner in attending to our customers needs to ensure their satisfaction be it a large or small job.

We assist with the selection and design of screening equipment to suit each application. As an extra service we carry Exchange Drive units for Mac’s Resonance screens. We also offer a maintenance service, which includes balancing, changing of Working rubbers, Rubber bushes and all other Screen related materials and equipment.

Quality control systems are in place and Mac’s Engineering is striving towards ISO 9000 as well.

Exclusive Mac’s Screens are designed to balances one deck against the other. Non-productive counterweights are not needed. As a result, you get higher capacities with reduced operating costs for a lower investment.

The open design of the Mac’s Screen permits quick and easy replacement of screen cloth or poly panels, switching of interchangeable screen frames is another option.

The live action of the Mac’s Screen is never dampened by snubbers. Natural frequency shear-block springs transmit the entire throw of the positive drive to the decks resulting in even, vigorous vibration over the entire screening area. Overloads cannot deaden this full-stroke, live screening action.

Linear oscillation of the Mac’s Screen actually lifts material from the screen decks and throws it forward. Since material never slides over the surface, screen cloths lasts markedly longer. Intermediate size particles are dislodged by the live action so that blinding is minimized and screening efficiency is greater.

Mac’s Screens require as little as 30 percent of the power demanded by other screens of comparable size. They are driven by standard, normal starting motors and, once in operation, consume only a minimum of power.

In this exclusive design, the screen decks are supported at the centre of oscillation – the point of no vibration. The Mac’s Screen, therefore, transmits no vibration to the base frame or supporting structure. This cuts installation and maintenance costs substantially, saving are realise in the structural support steel and civils required.

Mac’s Screens are so efficient and well balanced that they can be offered in standard lengths up to 30ft. and widths to 6ft. And a single screen can make up to seven size separations – a job requiring two or more screens of other makes.

No vibratory screen, regardless of type or make, classifies as accurately and economically as a Mac’s Screen. There are several good reasons why. A Mac’s Screen offers true balanced-mass design and point-of-no-oscillation suspension. Two swinging frames interconnected by shear-block springs oscillate in opposite straight lines in a natural rhythm and at higher amplitudes than other screens can achieve.

These Mac’s Screen design features combine to give you greater screening capacity and efficiency with unmatched economy. They are applicable to all screening applications including washing, dewatering, sizing and scalping. 100% of the Mac’s Screening area is effective, and blinding by near sizes is eliminated through the live, positive throwing action. Consequently, Mac’s Screens are preferred when maximum throughput and tonnage is desired. Capacities are greater than for comparable sizes in other screen designs.

The open area of the screen cloth in Mac’s Screen horizontal screens is 100 percent effective because the cloth is at right angles to the fall of the particles. On inclined screens, the effective screening area of each opening is reduced by as much as 20% in inverse proportion to the angle of incline. The greater the angle, the smaller the effective area. This is another reason why Mac’s Screens provide greater screening capacity and more accurate product separations.

Mac’s Screens are shipped complete and do not require any special foundation or supporting structure. Since they do not transmit any vibrations at all through their frames, they can be mounted over bins, on portable rigs or in buildings where vibration would be damaging. They are equally effective on wet material as on dry, and they can be equipped with spray bars and other accessories of typical screening operations.

The Mac’s Screen is simple in design. There are no gears or oil-bath seals to vibrate and wear out. A standard motor mounted on the frame powers an eccentric drive on the lower deck through a V-belt pulley. The linear reciprocating motion is produced by the eccentric driving the upper deck through a flexible connecting rod. This drive unit can be removed and replaced with a service exchange unit in + 2 hours.

The upper and lower decks screens are interconnected by shear-block springs and link arms, which oscillate the upper deck against the lower. Once set in motion, the springs keep the decks oscillating in a natural rhythm with little power loss by alternately storing and releasing energy.

The amount of eccentricity (the throw of the cam) positively determines the amplitude of deck vibration under all load conditions. The frequency of vibration is positively controlled by the speed of the motor and the relative sizes of the V-belt and motor pulleys.

The wooden drive connecting rod (which also acts as a safety system) attaches to the lower screen deck through a shear-block spring, which transmits power gradually at the start and constantly equates power from the motor to the actual needs of the system regardless of load. This feature not only eliminates the need for expensive, high-starting torque motors but is protects the motor against overloads.

The Rosta or silent block link arms are pedestal mounted exactly at the midpoint of oscillating where there is no vibration. Consequently, the link arms do not transmit any movement or vibrations to the base frame.

MAXIMUM THROW UNDER ALL LOADS

Each spring consists of two solid-rubber blocks bonded to metal and compressed by plates. Struts connecting springs on upper and lower decks are squeezed between the rubber blocks. In the linear oscillation of the two decks as the upper and lower decks move away from each other, the shear-block springs absorb some of the energy. Then as the decks move towards each other, the springs release their stored energy. This action continues in a natural rhythm with little loss of power. Thus the power required to operate the screen is a nominal makeup for the friction loses. This accounts for the low power requirements. (The motion is like a bouncing ball).

Mac’s Screen shear-block springs do not require any maintenance and are not subject to sudden failure as steel springs are. They are normally good for 5-years and longer, and they visually signal failure so that they can be replaced during normal shutdowns without any loss in production. There are no sudden, unexpected breakages as with other type springs.

POSITIVE FLOW WITHOUT SLIDING OR BLINDING

Mac’s Screens meet all application requirements from tough mining and quarry sizing to the separation of delicate chemicals and foodstuffs. Each Mac’s Screen is individually job-engineered for the particular application. Amplitude and frequency are matched to the specific requirements of the job.

Amplitudes may range from 5/16ths of an inch (8mm) for gentle, fine screening to a whopping big stroke of ¾’ inches (21mm) total travel. This is almost twice as big as maximum stroke lengths of other screens; hence, nearly twice as effective in anti-blinding and anti-plugging action. The built-in amplitude is consistent over the entire screen length.

ONLY FOR STATIC LOAD

The weight of each deck in a Mac’s Screen is borne by the link arms, which in turn are supported by pedestals. Suspension is at the point of no oscillation. Thus the pedestals and frame do not carry any of the dynamic load, and the drive and bearings for the eccentric shaft do not carry the weight of the decks and material as on most other screens.

Consequently, the Mac’s Screen drive system is mechanically simpler than those, which must withstand the continual pounding of decks and counterweights. Mac’s Screen drives have four inexpensive anti-friction bearings, which are more than adequate to bear the maximum loads. They require greasing only once a week of operation, but this is the only maintenance a Mac’s Screen needs. Link arms and all other moving parts are mounted in pre-stressed rubber bushing which have held up beautifully for more than fifteen years on many screens operated at full production.

SEVEN CUTS FROM ONE DOUBLE-DECK SCREEN

A Mac’s Screen can provide up to seven cuts as illustrated. To do this with screens of another design you would have to have two screens in tandem with four times the power requirements. This is because other screen designs are limited to lengths of 16 feet although a few single-deck screens are offered in lengths to 24 feet. Mac’s Screens are available in standard lengths to 30 feet and the longer makes seven cuts from one screen possible.

A Mac’s Screen need never be any longer than a job requires. When it is desirable to wash, dewater and size on each deck, Mac’s Screens are available with the necessary lengths. And there are enough available lengths so that each job can be carried to satisfactory completion without compromise or without auxiliary equipment to finish any of the jobs.

Both shear-block springs and screen cloths are exposed and can be inspected visually. When necessary, they can be replaced or changed on a maintenance day. Screen cloths are held tightly in position by two methods. Fine screen cloth is retained by clamping rails, (on the 4-foot wide machines only) which bolt to the sides of each screen deck. Tension on the clamping rails can be adjusted to provide desired tautness in the screen cloth. Heavier screen cloth and plate are clamped in place by flat bar straps directly onto the screen frames.

A Mac’s Screen is always balanced and never requires rebalancing by external adjustments or counterweights. The true balanced-mass of Mac’s Screens has application as well as operational advantages. For example, conveying pans can be installed under the balanced decks to discharge all material at one end, and up to four screening decks can be used instead of the usual one or two. The variety of ways that the Mac’s Screen can be adapted to special requirements are unlimited. If you have an unusual screening requirement it will pay to check with a Mac’s Engineering representative.

The low profile or elevation of all Mac’s Screens facilitate plant layouts and installation. Also, since the frame does not shake or move, you may install the Mac’s Screen just about anywhere you care to including over bins and on elevated structures supporting other equipment.

It is impossible to publish capacity tables for horizontal vibrating screens because there are too many interrelated factors. This bulletin would take the form of an advanced textbook if filled with all the tables, charts and formulae needed to match a specific screen model to a job’s requirements. Then too, proper screen selection involves a large measure of empiricism acquired through field experience and carefully conducted laboratory experiments.

The best way to select a Mac’s Screen is to place your confidence in Mac’s Engineering and let them make a recommendation. You can help in the selection by defining your job requirements as precisely as possible and by supplying all pertinent data on the material to be screened. Completing the enclosed Job Analysis From may be the most convenient way to do this. If you need additional copies of the Job Analysis Form for Mac’s Screens, simply contact the nearest Mac’s Engineering representative. He will be glad to supply additional copies.