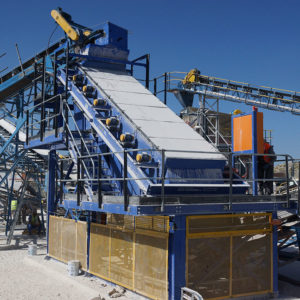 INTRODUCTION TO THE HIGH FREQUENCY SCREEN

The HIGH FREQUENCY SCREENER is a very specialized unit, whereby the operator can have access to adjusting the following variables and advantages, directly related to the performance, namely:

The screeners have rubber isolators fitted to the support frame stubs, and to be supplied by the client, are the ‘Bellows’ that are fitted around the inlet and outlet chutes. This can be from a Linatex type rubber, or similar soft rubber, that is wrapped around and strapped to inlet and outlet chute work, to create a dust seal, should this be required.

This then isolates the screener from the structure.